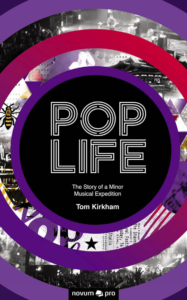 2016 was a bad year. Globally, it was the year of Brexit and was rounded off with a Trump!  It was bad for pop music too: David Bowie had died in January. And then it seemed the heroes were rushing for the exit.   Bowie was closely followed by Merle Haggard and Glen Frey (of the Eagles), and later in the year, Lemmy, Sir George Martin, Leonard Cohen, George Michael and a dozen others. And then on April 21st, Prince, died.

On the personal level Tom Kirkham was already having a bad year. He was feeling his mental health wobbling. And Tom Idolised Prince. He was devastated. He felt the urgent need to do something to give his life structure and purpose. So he decided to attend a live music gig every week for the next year. Music is Tom’s balm and his passion. And with this plan he at least knew what he had to do. No matter how he felt, he had to get to that gig. Pop Life is a heartfelt, funny, ever so slightly crazed chronicle of that intense year.