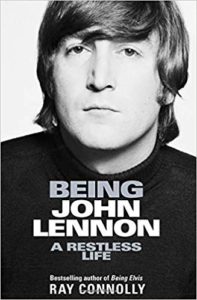 “Many people ask what are Beatles? Why Beatles? We will tell you. It came in a vision – a man appeared on a flaming pie and said unto them ‘From this day on you are Beatles with an ‘A’. Thank you, mister man, they said, thanking him.”  So wrote John Lennon, shortly before he became the most famous man on the planet.

And that’s all the background you’re getting. Tim is a self-confessed Beatles anorak. Many people have Chekhov’s Revolver on their mantelpiece, but only Tim has Stanislavski’s Sgt Pepper and Dostoevsky’s Rubber Soul as well. And he is only too delighted to delve into the minutiae of John Lennon’s life with a fellow… anorak.

There are countless Lennon biographies, which variously just map out the events of his life, or in lurid terms portray a monster, or a broken child or a grotesque. Being John Lennon is not a memoir, but a full-scale life by a man who knew Lennon well, as a friend, and shows him as a human being. Ray Connolly met the Beatles when they were making Magical Mystery Tour, and he was one of the journalists Lennon regularly turned to when he wanted to talk. And Lennon loved to talk. About the Beatles, about Paul McCartney, about Yoko Ono, about May Pang, and everything else in his life. But mostly about John Lennon.