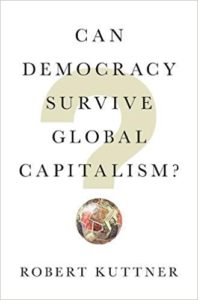 John Maynard Keynes said, “Above all, let finance be primarily national.” Keynes understood the dangers of unfettered finance, and if he’d had his way the Bretton Woods system of international controls would have been still stronger. In his new book, the distinguished journalist and commentator, Robert Kuttner, writes, “Government needs to explicitly assert its right to prevent global laissez-faire forces from undermining its capacity to devise and broker a decent social compact at home.”

Kuttner’s book brilliantly sketches the construction before and after the Second World War of a system in which capitalism was effectively regulated and delivered widespread benefits, at least within the western democracies, and its dismantlement in the period since the mid-70’s. He shows with admiral lucidity how and why the free-trade shibboleths captured the centre-left and acquired the power to hugely favour a tiny and very narrow section to the disadvantage of the overwhelming majority.

We can see the results in the election of President Trump, in Brexit and in the rise of ultra-nationalist far-right parties in Europe and beyond. The dangers are obvious, and Kuttner draws disturbing parallels with the rise of fascism in the thirties. Can democracy survive? Tim was hoping to ask him that very question.