Lawrence Block – The Girl With The Deep Blue Eyes

Posted on November 2, 2015 by Johnny Mindlin 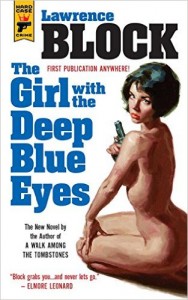 We last spoke to the great American crime writer, Lawrence Block, nearly two years ago. Although Larry is one of the world’s great travelers – he has visited something like 135 different countries – he was at home in New York on this occasion, while we are in London, England. We toyed with the idea of going to the shore and rigging up a transatlantic telephone with two tin cans and a very long piece of string, but opted instead for the technological wizardry of Skype.
The new book finds Larry very much on form: The Girl With The Deep Blue Eyes is a steamy noir thriller of sex and violence, reminiscent of James M Cain. We were intrigued by the moral ambiguity, the insalubrious setting of inland Florida, and especially the consummate skill with which he handles the pretty full-frontal erotica. But of course, Lawrence Block has form in that area…

Johnny Mindlin, the producer, spent 10 years in high-end speech radio, producing book programmes, entertainment / review shows and politics/discussion shows. Tim Haigh is a radio presenter and broadcaster and books reviewer. He also writes for national papers on books and literature.
View all posts by Johnny Mindlin →
This entry was posted in Fiction. Bookmark the permalink.