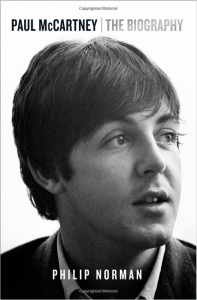 When Philip Norman published “Shout” in 1980, it quickly became and long remained the standard Beatles biography. It was noted at the time that there was a marked preference for Lennon over McCartney in that book and Philip was pretty much tagged anti-McCartney. In the years since then, he has reassessed his attitude and came to the conclusion that he had been unfair. McCartney, he now acknowledges, is colossally talented, nobody’s lightweight and is a better and more interesting man than he had been given credit for.

As it happens, Tim didn’t pick up on the bias in “Shout!” because he shared it and, like Philip, has followed a parallel path to a huge admiration fo Paul McCartney. Tim loved Philip’s recent biography of Mick Jagger so he was dying to read his superb full life of McCartney.