Jamie Cawley – Beliefs And The World They Created 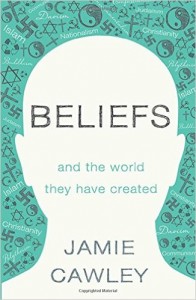 It goes without saying that there is a difference in kind between what you “believe” and what I “know to be true”. Whether it is the True Religion (be it Judaism, Christianity or Islam), Dawkinsite scientific certainty or the Demonstrable Facts of realpolitik, we all have our cherished articles of faith, and it can be fighting talk to question the shibboleths. So you might think that Jamie Cawley is a brave man to undertake a panoramic discussion of belief as a recurring phenomenon in human societies. Between the worldwide emergence of polytheism and the contemporary creed of Environmentalism, he makes a brisk and entertaining tour of the high watermarks of belief around the world, which will almost certainly offend many, and that, in Tim’s opinion, is a noble ambition.