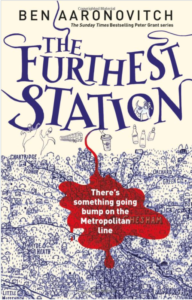 You might think a man who had a couple of Dr Who serials under his belt (1980’s – the Sylvester McCoy era), might rest on his laurels, but like the rest of us Ben Aaronovitch has a living to make. Ben has a solid CV of writing for television and TV spinoffs, but he has recently been making serious waves with his series of supernatural police procedural novels and graphic novels, starting in 2011 with Rivers Of London. He allows that the success of these Peter Grant books has considerably exceeded his expectations. But we’re not surprised. There is always room for well-written, funny, urban fantasy, right?. We met Ben at his publishers in Blackfriars to discuss the latest instalment – The Furthest Station.

Sections from the Audio book are read by Kobna Holdbrook-Smith courtesy of Orion Publishing Group Limited (The Publisher).