Steve Richards – The Rise of the Outsiders: How Mainstream Politics Lost its Way 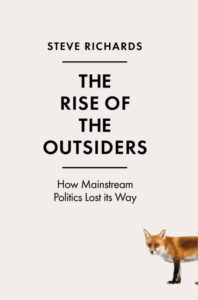 Steve Richards has presented a series of half hour broadcasts for the BBC about British prime ministers, which he delivers as live and without a script or even notes. They are brilliantly insightful, and wonderfully fluent. With characteristic modesty, Steve says that any of us might have made these programmes, on the grounds that we all lived through those times. He is wrong. He is among our most distinguished and trenchant political journalists, and I doubt that there are six people in the country who could have made them.

His new book considers the most fascinating development of recent politics – the rise of the outsider. A loss of trust and faith in the mainstream, he says, is a trend and he considers how the political mainstream has lost its mojo while the agenda has been hijacked by individuals and organisations that in times past would never have come close to power. Essentially, says Steve, the centre-left and the centre-right in one case abandoned ideology and in the other lurched into incoherence. In this interview, we discuss how this happened, what it is doing and what it is going to mean.