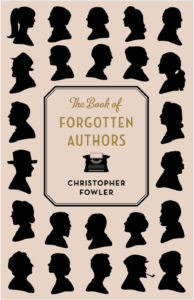 Christopher Fowler is a good friend of this site, having appeared with us three times already. But then, he will keep writing books that we find irresistible. This time he has assembled an Aladdin’s Cave of writers who have been neglected in one way or another. Some of them have been completely forgotten, as the title suggests – Rosalind Erskine anybody? –  but then there are the writers whose names are familiar, but whose books we have forgotten to read – Ronald Firbank, Leslie Charteris? – or who have fallen out of favour (or print) – Dennis Wheatley, Sven Hassell, Barbara Pym?

This is catnip to Tim. He dived into the contents list like a kid in a sweetshop, finding the authors he has read, noting the ones he should have, and discovering some he is certainly going to. He got together with Chris in his palatial, minimalist flat to discuss their shared enthusiasm over a cup of tea.