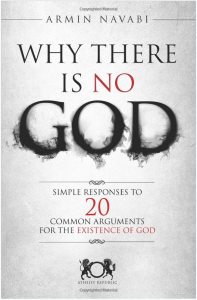 As a youth in Iran, Armin Navabi was advised that if a Muslim boy died before the age of fifteen, God, in his infinite benevolence, would ensure that he went to heaven. Terrified that he would miss his step and fall into divine disfavour, Armin threw himself out of a window when he was fourteen, hoping to cash in on this guarantee. Happily he did not perish, although he spent many months in a wheelchair. This gave him a good deal of time to think, and the end point of his reflections was atheism.

Later he founded Atheist Republic, a non-profit organisation aimed at creating a worldwide community of atheists, and with the purpose of joining in the controversy that is raging these days about the status of religion in general. Why There Is No God is his primer for new participants in the debate. It is a good-natured book offering twenty arguments for the existence of God and adumbrating the atheist responses to them.

Johnny Mindlin, the producer, spent 10 years in high-end speech radio, producing book programmes, entertainment / review shows and politics/discussion shows. Tim Haigh is a radio presenter and broadcaster and books reviewer. He also writes for national papers on books and literature.
View all posts by Johnny Mindlin →
This entry was posted in Religion. Bookmark the permalink.